The lonely pursuit of justice 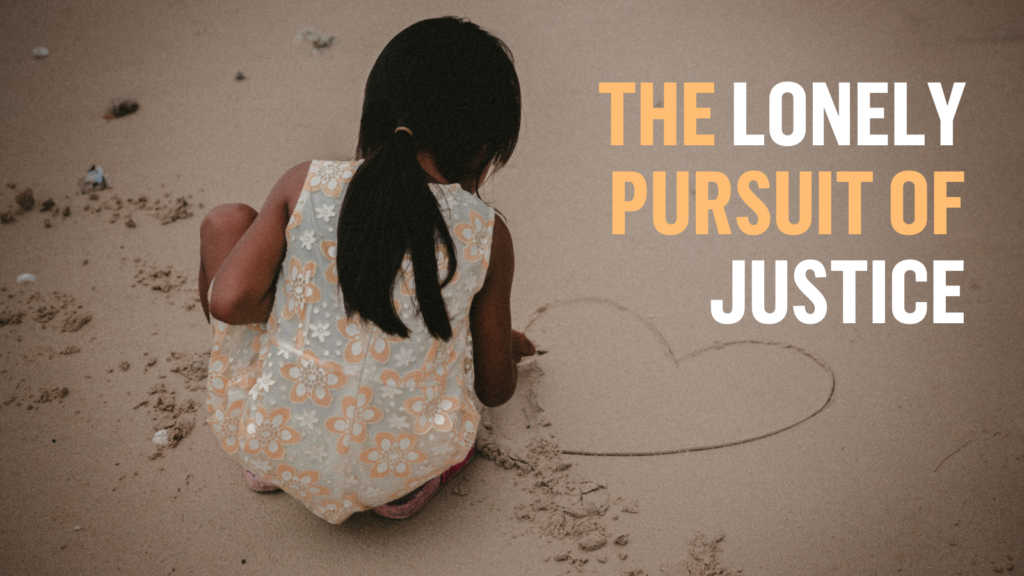 Seeking justice can be a lonely path. If you’re reading this today and feeling like you’re the only one in your family, your friendship group or your church who seems to care about justice, you’re not alone in feeling alone. I’ve been there.

I remember when I realised I was in the top 1% richest people in the world and 1.4 billion others had to survive on less than $1.25 a day. It made my #firstworldproblems seem ridiculous. Was that you, too?

I remember when I was told women and girls were forced into dingy rooms, beaten and raped by men in uniforms until they feared police, then sold repeatedly for sex for just a few dollars. I was shocked and outraged. Was that you, too?

I remember when I learned there were over 40 million children, women and men bought and sold like property. I struggled to comprehend the number, let alone the dehumanising brutality of slavery. Was that you, too?

The world is an imperfect, inequality-filled place in so many ways. In my late teens, I became increasingly conscious of the privilege I enjoyed and just how unfair that seemed in contrast to the lives of so many others on the planet. Because my privilege was an undeserved blessing, I felt compelled to give of what I had received to help those in need.

I would never have thought of myself as an activist. Yet when I looked around me, no-one else appeared to be paying attention to these injustices. How could this be? It was so obvious to me that we needed to do something to help vulnerable people and those who were suffering.

I organised a couple of fundraisers at church and people made contributions because they knew me. Maybe they thought it was cute. “That’s nice that you care about social justice” was the vibe.

On more than one occasion I was told, “Social justice is important, but it’s secondary to the gospel,” as if loving our neighbours and sharing about Jesus were separate things. You might have heard this before, too.

In some ways my pursuit of justice became a burden. I had this conviction that to whom much is given, much is expected – or in Spiderman terms, that with great power came great responsibility. I couldn’t do nothing while brokenness and inequality persisted in the world. At the same time, I didn’t feel like I was making much headway in conveying the urgency of the world’s injustices to my community, let alone actually having an impact on the problem.

I’m guessing you may have felt this, too.

You are not alone. You may be a lone (justice) ranger in your immediate community but there are so many others just like you around Australia and around the world. That’s one of the reasons we created the IJM Justice Seekers community – to connect you with like-hearted people and remind you that you are not alone in your pursuit of justice and your heart for the most vulnerable.

Your faithfulness will bear fruit. It may feel like unrequited love (of justice), but hang in there. Many IJM Justice Advocates started alone but their commitment to justice has led to friends and family jumping on board, their church getting involved, their workplace taking an interest, their local community helping to raise $20,000 (by playing table tennis!).

People are starting to pay attention. Even my dentist remarked just last week that five years ago, no-one talked or knew about modern slavery and now supply chains are in the news more and more often. In line with Martin Luther King Jr’s words that “the moral arc of the universe is long, but it bends towards justice,” these things didn’t happen overnight, but rather over a period of years.

Seeking justice can be a privilege rather than a burden. Often our conviction about ending injustice is so strong that when we share about our passion, we tell others that they have a moral obligation to act, to give, to care. We may feel that weight ourselves.

The truth is that none of us has the ability to single-handedly end modern slavery or any structural injustice. Nor is it our duty to do so. It’s actually not your fault or mine that children are starving or enslaved.

So what if we started seeing the task before us less as a moral obligation and more as an opportunity? What if we lose the burden and embrace the privilege of seeking justice?

That’s my invitation to you. Today we have the chance to be involved in making the world a better place, using the resources we do have at our disposal, not what we don’t have. Yes, slavery is vast and brutal. But we can be hopeful in seeking justice as we see rescue and restoration in broken places. And we can be joyful in the part we get to play in that. “From the frontlines of the Ukrainian refugee crisis ”

Hsu-Ann Khoury20 JUNE 2022  As we commemorate World Refugee Day today and the conflict in Ukraine approaches the four-month mark, here is an update on the situation on the ground and the work that IJM is doing at the Romanian border.  Why is IJM involved?  IJM doesn’t usually work with refugees or do any war “The end game for corporations is ending impunity”

Response to: “Paper Promises? Evaluating the early impact of Australia’s Modern Slavery Act” Jacob Sarkodee (@Sarkodee), Chief Impact Officer IJM Australia 8 February 2022 Over the last few years, Australians have been told that the solution to the crisis of slavery in supply chains of goods and services entering our economy is better corporate behaviour.