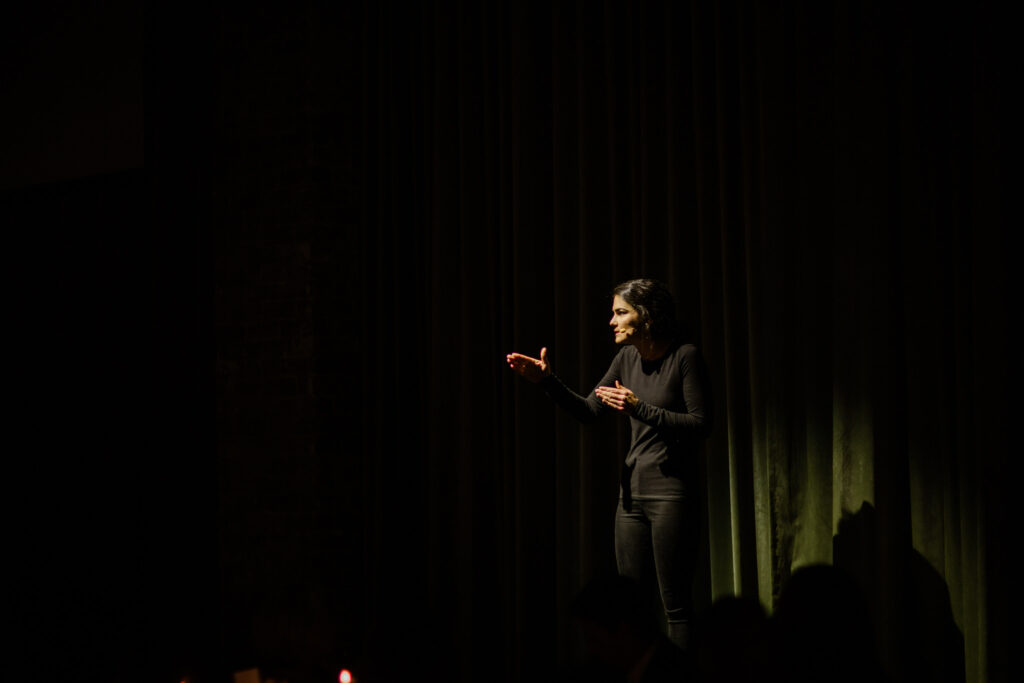 Grace is a Sydney-based actress. She recently wrote and performed a monologue at an IJM Australia event, depicting the experience of a survivor of sex trafficking. She spoke to us about her process and reflections in preparing her piece.

Q: Can you tell us about how you put your monologue together?

The IJM team sent me links to documentaries and video stories that shed light on sex trafficking as an issue, especially in India. The truth behind sex trafficking in India, a TED talk presented by visual artist Leena Kejriwal, was particularly helpful. I found her incredibly inspiring and hopeful and that was vital for me in the context of researching something as awful and dire as sex trafficking.

I also conducted interviews with people who had worked with IJM in India.

Q: Did anything stand out to you from those conversations and your research?

There was one interview in which someone who had worked with IJM in India explained that when a woman is first trafficked for sex, the goal is to break her down – to break down her sense of worth, identity and her sense of hope. I won’t go into detail about the ways in which traffickers do this, but it was incredibly disturbing and difficult to get my head around.

With all the information and emotion I was consuming and absorbing, being given plenty of time to create the work was so important – I needed the time to just sit with the facts, the statistics and the stories and just let my subconscious churn through it.

Part of processing this was having a few sessions with IJM Australia’s staff chaplain Jenny. She helped me avoid being continually overwhelmed about how dire the situation is. Instead, Jenny helped me focus on how much hope there is in the rescue and redemption stories we see in IJM’s work and the work of other organisations in this space.

It’s important to emotionally distance yourself when you need to. It’s good for humans to be in touch with issues in the world, and hopefully that sparks involvement in the fight for a just solution, but it’s not healthy for us to constantly feel guilty and/or overwhelmed by the problem, that kind of mindset is not productive for the issue or the individual.

Q: What gives you hope about this situation?

There is no more effective era than right now to change the attitude of a culture because relevant, informative and inspiring material is just a click away. There is meaningful ground being gained, hearing talks from Leena Kejriwal and from Gary Haugen (The Hidden Reason for Poverty the World Needs to Address Now) are examples of people who are bringing these
issues to the fore through TED talks and creativity.

I have so much hope that attitudes towards women will continue to evolve, that they will be empowered and their potential acknowledged. I have a lot of hope for a changing culture for the better.

At the event where I performed, CEO Steve Baird made a comment along the lines of, “Tonight we’ve been exposed to the depth of corruption in terms of sex trafficking, but we’ve also been exposed to the compassion and generosity of people connected to IJM.” I was very encouraged by the significant funds raised and the commitment of IJM staff to the cause, how thoroughly considered the projects are and how they make long lasting change. “How to protect people from violence during a pandemic”

“Lockdown at home for people with jobs mean [they can] chill and relax. But lockdown for us is being caged with no food and water. I don’t know how long we have to endure.” Migrant fisherman stranded in Thailand Nine million additional children are at risk of being pushed into child labour by the end